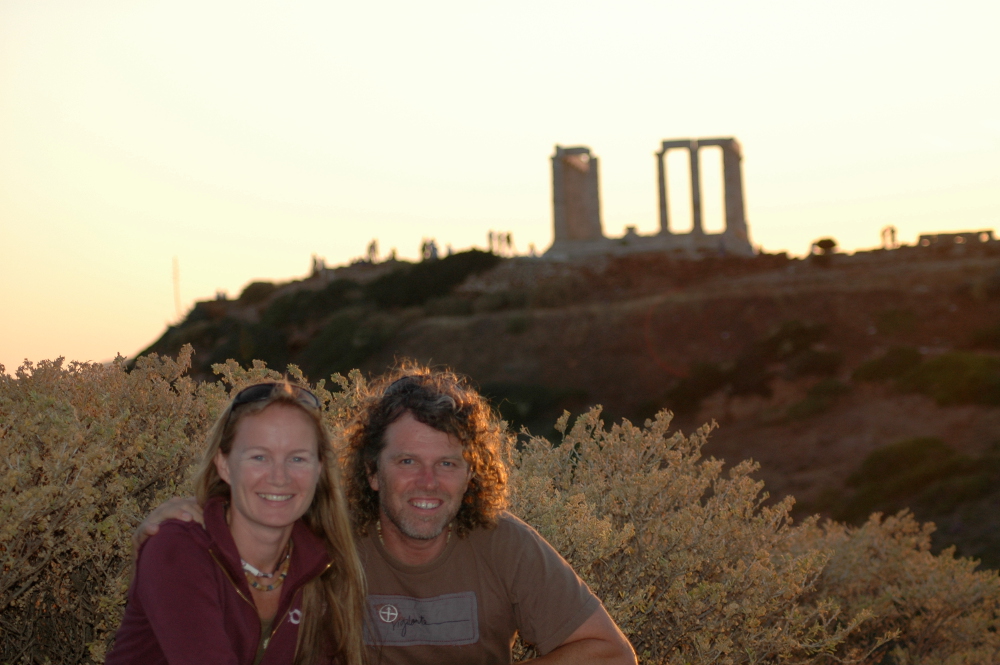 After an entertaining evening with the French and Germans in the beach side carpark, drinking ouzo, the next days task was to buy a new camera lens in Athens and get more camping gas, so we could have cold beers at the end of the day.

Quite achievable really, well after being directed buy the locals from shop to shop for most of the morning and still no camping gas, it was decided to have a rest from the gas and head into Athens to buy a new lens. We parked our van in the very special spot in the heart of Athens and went looking for directions to the camera shops.

Everyone is very helpful and wants to do their best, ,evan if they have no clue, and we spent some time getting sent again in many different directions, finally finding the area where the camera shops are only to find them shut. No problem, we figured they were probably closed for a late lunch and would be back later, not so. They all close at lunch on Mondays, so still camera lens and still no gas and still in Athens!

We decided to push onto Delphi hoping that we would find gas along the way and also keeping our fingers crossed we could find a lens in  Greeces second largest town – Thessalonaki.

On the way to Delphi we were following a truck that had our gas, but it didn’t stop, by this stage we were resigning ourselves to a campground to plug into power to cool the beer, we were hoping that our back up stove didn’t run out of gas either!

We were merrily driving along when David skidded on the brakes did a u-turn, pulling up at some random run down shop which looked to me to be a junk shop, but low and behold, it had gas! Cheap to, yeah hah. Onwards to Delphi.

In the words of ‘Lets Go Europe’ “…this stunning mountain top sanctuary of the Oracle of Delphi’ and it was. Perched at around 700m on the edge of mountain, the town although geared towards tourists, had a relaxed and charming feel to it. Free camping was out of the question quite simply because of the geography and lack of space.

So we camped in a neat little place about 2 km out of town on the cliff face and with stunning views and took the opportunity to catch up on chores like washing, cleaning the van and cleaning ourselves, with something other than the solar shower. Pulling up at beaches jumping into the cold water and then taking turns under the solar shower has proven to be an entertaining affair for the locals.

The Greeks love the beach and so finding somewhere not crowded has proven to be a little difficult, but they are great people. They seem to find David a little entertaining as well, shopping ventures often turning into comedy shows, while David trys to order olives, feta and other delicacies from the deli section. The language has been difficult , simple words are not so simple in Greece, our poor attempt not seeming to bother anyone, but rather causing more amusement.

From Delphi to Platamonas, via a quaint seaside town called Itea. Platamonas was a sleepy little town with some of the most ultra trendy cafes that would rival the best in Australia, far to trendy, for the likes of David and I.

We settled for a Gelati and a stroll down the main street, parking the van in the quaint little marina for the night. The next day we headed inland to Mt Olympus. To quote Lets Go Europe again “Erupting out of the Thermic Gulf, Mt Olympus, Greece’s highest peak, so mesmerized the ancients believed it to be the dwelling place of the pantheon. It was definitely stunning and well worth the trip, and I’m sure the views would have been spectacular, if it wasn’t for the rain.

From Mt Olympus to Thessalonika. Two goals in Thessalonika, get to the Romanian Embassy again, to see our Visas had been approved and buy a camera lens! After parking the van in a fairly random spot in this bustling, trendy town we headed to the Tourist Police, yep thats what they are called and there job is not to arrest us, but rather help us.

They pointed us in the general direction of the camera shops and told us not to bother with the Romanian Embassy as it was some Greek guy, in a nice house out of town, with a nice title, not to helpful and too hard to find, we took there advice, given our past experiences with Romanian Embassy. Not understanding a word of there directions to the camera shops we just headed into the busiest part of town to see what we could find.

We chanced across a tiny little office on the second floor of a run down building, where they fixed cameras and gladly agreed to look at our broken lens and if possible fix it, all in less than 24 hours. Big yea-ha the next day when we went back the following day and for a mere 60 euros, they had fixed it for us, compared to a new one at around 400 euros.

They did point out that whoever looked at in Italy had put it back together wrong – David!!!  We think we got a parking ticket as well, but aren’t sure as it looks like a bunch of worms have crawled across the page, maybe it was just a warning o’well, nice free souvenir. We free camped one night just out of Thessalonki in a place called Epanomi.

Next stop Sarti on the Sithonia peninsular, another great beach side town, and another night free camping by the beach. We woke up on Saturday morning only to realise it was actually Friday morning. David made the executive decisions to race to Alexandrouplis to try to reach the post office by five and pick up our required special car insurance for Turkey, some 400kms, the first 100kms took 2 hours, through mountains winding roads. we made it in time only to find out that the post office closes at 2pm and wouldn’t be open again until Tuesday as Monday was a public holiday. Ouch.

Not finding any where we were comfortable free camping we bit the bullet and headed to a nice beach side campground within walking distance to town and resigned ourselves to 4 nights there. Alexandropulis was nice enough, but probably not a place we would have chosen to spend 4 nights, but luckily our German nieghbours at the campground had a great little white schnauzer.

By Tuesday morning we were well rested and a little antsy to get moving, after great debate we decided to get some TLC for our trusty van before heading into Turkey, as well try for our Insurance. No luck with the insurance, to stay we were a little cheesed with the insurance company is a fair understatment. We had explained to them in detail before leaving the UK our situation and they had promised all the help we needed.

By now it had been two weeks since letting them know our dates for being in Turkey and we had already burnt up one of our four weeks insurance, waiting for our insurance. We had told the we were happy to pay extra for registered mail as well and they still sent it through the normal system. the post office in Alexandrouplis had told it should only take 4-5 days from the UK.

Not wanting to waste any more time we decided to head for the Turkish border, hearing that we may be able to buy insurance there, but not before getting the van some TLC.

The wonderful Greek people came through again, a young guy at the service station changing our oil for the cost of the oil on the spot, then a bloke repaired and refitted our muffler for 40 euros, its lost that sporty, throaty sound, but now purrs like a kitten and the guy at the Renault service place greasing the universal joint on the front wheel that the busted rubber boot covers  for a mere 2.50 euros.

Besides all the paper work and having to show our passports for what felt like a thousand times the border crossing was smooth and easy, we were excited to finally be in Turkey a destination high on both our lists. Border crossing wasn’t as easy for the Greeks, given the history and bad blood between the two countries, they were being made to empty out there entire vehicles, we we were basically being waved through.

As soon as we were through the border, it started raining torrentially, but onwards we pushed to our first stop, Gallipoli. We free camped out of the main area at a spot overlooking ANZAC Cove and spent most of the next day wondering around the area.

It was a moving experience for both of us and far outweighed anything we had experienced in our travels. The Turks are great people, and we feel very welcome here. While at a memorial site in Gallipoli, about a dozen school boys surrounded the car, excited to meet us and welcoming us to there country, it was a little overwhelming but very sweet, they gave us a gift of a full bag of plums to welcome us to their country.

We have only been hear two nights but have already had many wonderful experiences. Being waved at, old guys randomly coming up to the car, while we’ve been stopped at lights to tell us they have children in Australia, the list of kindness is already extensive.