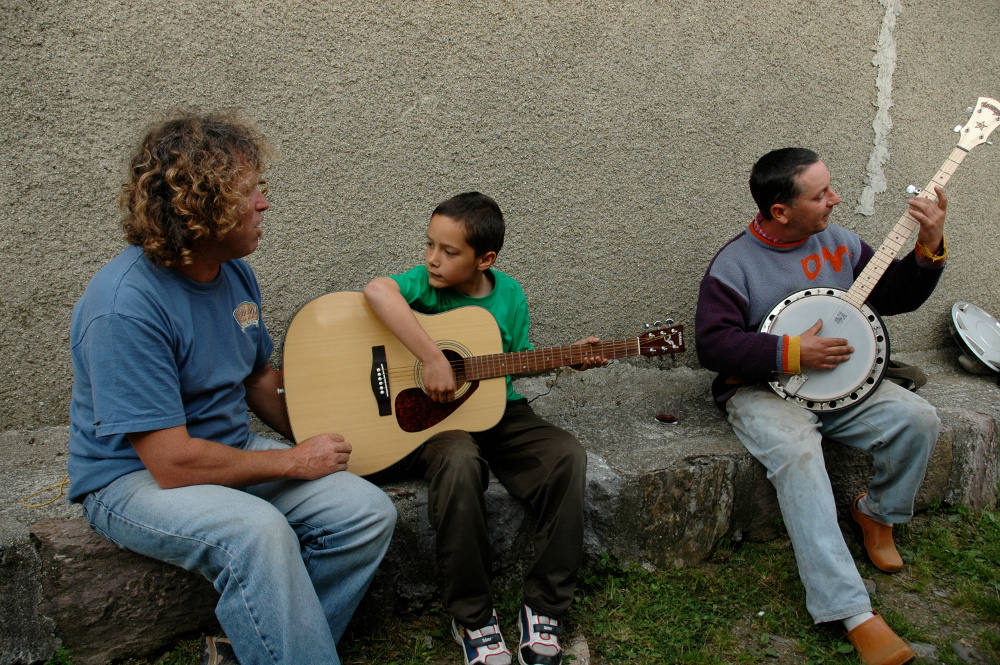 Well we are finally in a place were we can get a convenient miraculous wireless connection. Only problem is that somehow the last 5 weeks of on Tour has miraculously disappeared from the Mac.

We have paid a small fortune for a connection, 12 euros for 24 hours, but have nothing to send out. So here goes an attempt to catch up the last few weeks of travel.

We had a great time wandering around York and managed to locate the oldest and most haunted pub for a quick beer. We drove from York to catch up with family in the Peak district. They are related to Mels grandfather who was sent to Aus as a crim, not to many years ago.

We spent two days there in total the second night at the ‘local’ having one, one to many drinks and waking up feeling a little average the next day.

From there we headed to Wales, which is great country. It didn’t rain once and there is a castle around every corner. We drove from the peak district to the North of Wales, Rhyl, Colwyn Bay and Caernarfon, which has a sensational castle. Then through the Snowdonia National Park, which is stunning through Portmadog and spent a night in a camping ground in Abersoch with a amazing view of the Bristol Channel. The next day we headed to the Pembroke National park in the South and spent a night in a carpark, between a haunted castle and a cemetery, spooky, close to. Saundersfoot.

The following it was back to Shane’s via Stonehenge to regroup and oranges ourselves for Europe. When we arrived back at Shanes they were having a street party on our behalf! We wish! I think they were just having a party for the sake of it.

We left Uk from Dover, making our ferry by mere seconds headed towards Boulogne in France. We headed in the direction of Paris, spending a night in a carpark of a closed camp ground, but on a pretty little river. We got there quite late and when went exploring the next day, we discovered that we were in a town whose claim to fame was the fact the Van Gough had killed himself there.

In fact he had spent less then a month there before doing himself in and they had proudly keep the room intact for art lovers and the like to absorb the creativity etc, blah blah. we decided to give it a miss. Onto Paris. We found a great camp ground within about 3km of the center of Paris 25 euros a night. Although it was expensive, it was also convenient and an easy bus ride to the metro and inner city buses.

We did the usual, Notre Dame, Louvre, Arch De Triomph, went to the top of the Eiffel tower, walked the Latin Quarter etc. In total we spent 3 full days and four nights. Paris is a lovely city and we found the French to be very open and helpful.

From there we headed towards the West coast via Chartres, which is a lovely little town with the Chartres Chapel and through Le Mans and down pass Nantes and the Bordeaux region. We had a night in a car park with a bunch of vans near Les Sables and than just north of Bayonne in the pine forest. Turns out the coast was pretty dull and we would have been better to stay inland. The first place we really enjoyed on the Coast was the town of Biarritz.

From Biarritz we headed inland to the Basque region and spent a night in another car park in a town called Espelette again with a bunch of other vans and woke up to a happening little market. From there we started our trek through the Pyrenees, which were absolutely, stunning. Given it had been a while between showers, for the sake of the general public we headed to a camp ground, which great mountain views in Cauterets, were we drove over to the Spanish side of the mountains.

The following day we headed up to Garvarine again stunning. We drove up towards the summit and got some great shots of the Renault in the snow. We had intended driving over the mountains towards St. Giron however we had to back track a substantial distance as the mountains were blocked by snow and rock rock-slides.

We were heading for St.Giron as it was the nearest town of any size to a village called Riverenert. Melanies distant cousin Nigel gave us the name of his friend Mark who lives in the Pyrenees in a tiny Hamlet near Riverenert. We had planned on phoning Mark before we arrived but we could only use the public phones in France with a phone card and a phone card in France was 7.50 Euro, too much for one call so we decided to just lob and try to find him.

We drove into Riverenert and asked the first person we saw if they new Mark Bukowski. It turns out they did and they invited Melanie into their home to use their phone. Mark was not home but we got directions to his Hamlet which was up a very narrow winding road to the top of a very high hill. As we were slow in the van we pulled over to let a car past and it turned out to be Mark. He asked if we were lost and as soon as he heard our accent he said he had been expecting us. Nigel had phoned him.

Mark and his wife Maryanne made us very welcome and we stayed a couple of days. It was great to get an insight into what life is like in a tiny Hamlet in a remote part of the Pyrenees. Marks neighbour Bernard was a cheese farmer, making organic cheese in the traditional way of the region.

Bernard had only 11 cows and milked day and night by hand. Every 2 days Bernard would make 3 wheels of cheese out of the 200 litres of milk the cows had produced.Bernard was an interesting character and was very happy to explain and demonstrate the entire cheese production process to us.

Maryanne was from the South of France and she suggested some places we should see on the way to the French Riviera, places we never would have found without her advice. So we left the Pyrenees and headed for the French Grand Canyon which is just North of Canne. After driving for a good part of the day we found a place to park the van on the side of a quiet country road near Apt for the night.

After about 45 minutes in bed we were both still awake and had a really uneasy feeling about where we we staying and we packed up at about 11.00 pm and set of to find somewhere with a better feel. Nothing really happened it was just that we were both getting the creeps. We found a camp ground in Manosque about 20 K down the road. We set of the next morning after a good nights sleep and happened on a little town called Moustieres-St. Marie. It was absolutely beautiful and steeped in history. After wandering around and some shopping we decided to have our first cafe meal since we left the UK.

Next stop the French Riviera. We headed for St Tropez for an early evening wander. It was a bit of an eye opener watching the very rich swaning around showing of their sun tans and very expensive out fits. It was also our first exposure to the serious white boat and Mega Yacht scene in the Med. We left St Tropez to look for somewhere to park the van for the night and found a car park right in the heart of St Maxime with about 20 other vans set for the night.

We headed for Cannes via the coast road where we found they were setting up for the film festival, we spent a good part of the day taking in all the sites associated with the film festival along with the marina and shopping regions. There was a massive tent matching the dimensions of the glass pyramid at the Louvre for the opening of he Da Vinci Code. We both really enjoyed Cannes.

On to Antibes for a quick look and and we found a huge Marina, Yacht Club, boat yard region with masses of huge Mega Yachts. Seems like it could be a good place to look for work we made it to a camping ground near Nice for the night. We headed into Monte Carlo where it was absolute chaos as they were setting up for the F1 Grand Prix.

We quickly decided to get through Monaco find somewhere to stop for the night and bus back into Monte Carlo. Not far down the road we found a parking area that allowed camping cars to park for up to 3 days in Menton. We locked up the van and bused into Monte Carlo. After walking part of the grand prix track and checking out the marina for Mega Yachts and classic sailing yachts we went to the Casino for the obligatory photo on the steps. A brand new Ferrari M430 pulled up while we were in the photo taking process, we now have a shot of Melanie beside here new car in the Valet parking out the front of the Casino.

After not a very good nights sleep on a busy roadside in Menton we were ready to head for the Italian Riviera. The traffic started in ernest at about 5.00 am, it seems everyone was heading into Cannes to get a parking spot for the for the opening of the film festival.

All we have time for now, more soon about our adventures in the Italian Riviera. We have been trying to move trough he expensive parts of Italy as quickly as we can so we don’t blow the budget and we have found internet connection to be difficult to come by and fairly expensive.