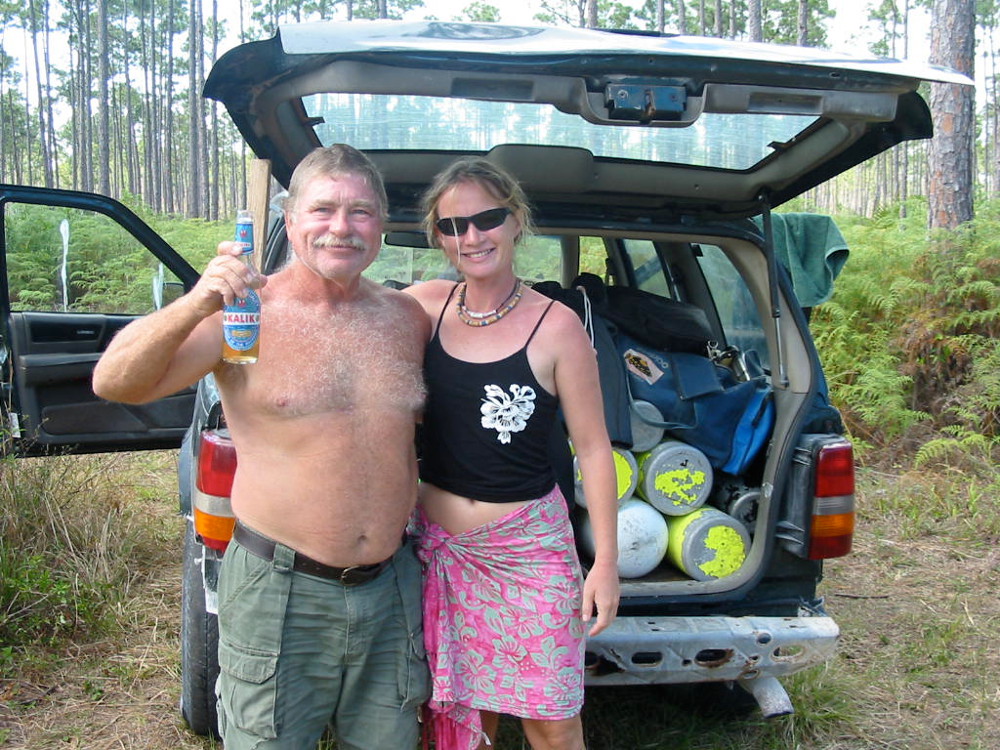 Well we are finally in the UK.

Our last charter in the Bahamas was a shocker. Fortunately the other crew, an English couple, turned out to be absolutely wonderful and we hope to catch up with them in England.

We were not sorry to leave the Bahamas, in fact we couldn’t get out of there fast enough. Although we almost missed our flights as we forgot to change our clocks to daylight savings time. Fortunately David noticed in a nick of time, we were in such a hurry the only person we said goodbye to was our South African friend, the new crew (poor unfortunate people) and the taxi driver.

Bye Bye, Moorings and the Bahamas, no regrets, it was a great and amazing year, we saw many beautiful places, met many amazing (and not so amazing), people, and had some unforgettable experiences.

The day before flying out of the Abacos we probably did one of the most amazing things we have ever had a chance to do, we are glad we didn’t do it any earlier as we would have become addicted and spent ALL our money doing it. Cave diving.

Abaco has one of the most extensive underwater cave systems in the world, I believe second behind Mexico. We went with our eccentric friend Fred who had Christmas with us. Fred gave up working for the US Navy as a civilian teaching nuclear power management system to become one of about 20 underwater cave explorers worldwide.

He has lived on a 2yacht for about 16 years and pretty lives hand to mouth and has mapped about 10 miles of unexplored caves under Greater Abaco island. We put all our faith in him, to have lived through countless dives in the caves, on his own. We figured he new what he was doing.&#xD;&#xD;Our first dive was a cavern in the middle of Abaco with a diameter of about 15m. The dive consisted of diving into tis puddle of water and dropping to a depth of 206 feet, about 63m.

David dropped like a lead balloon, I went a little slower to let my ears equalise and Fred stayed between us until I caught up, then he stayed deeper to be safe.  We had to be careful not to hit the bottom as it had about a 10 foot pile of debris, decayed bits of trees etc. If we had of sunk into it would have silted out the entire Cavern to about 0 vis. This was an amazing experience.

The Caverns/ caves on the island consist of a layer of fresh water on top of a layer of salt water, this is called a halocline. when the first person goes through the halocline, it mixes the two levels of water and looks like an oil and vinegar mixture.

As the last person to go through the halocline it was pretty freaky watching David and Fred turn into a oily mixture. This entire ordeal of dropping to over 200 feet in a confined space in limited visibility and watching people turn to oil was a little out of my  comfort zone is a small understatement to say the least , that is until narcosis sets in.

All of a sudden everything becomes just fine. In fact I was pretty impressed with myself to remember to look at my gauges, by this time Fred had us working our way back to the surface. On the way back the  halocline looks likes like an eerie ghost movie, with hazy clouds in the water. it was amazing , we also encountered albino, blind fish.I guess you would also have trouble seeing with no eyes. Freaky stuff. This dive was great, but even cooler was the cave dive.

The cave dive, into Dans Cave, was an unbelievable experience and we both feel very privileged to have had the opportunity. The three of us entered into a space that was just large enough to fit the three of us. We dropped to about 30 feet and then descended through a tunnel at 45 degrees with a diameter of about 2 1/2 m to about 75 feet.

We then entered into a huge cavern, that blew our minds. It was about 10 – 15m across. It was still considered a cavern not a cave as you could still see a very small penetration of light from the entrance into the cave. Fred then took us through a penetration barely big enough to get through. We were now into fair dinkum cave territory.

Without torches it was as black as you could ever imagine. It was incredible. Huge Stalagmites and stalactites. Shining the torch through some of them turned them into huge glowing crystals. We penetrated in total  to about 520 feet and did a small loop. In total we did about a 1000 foot cave penetration to just over 70 feet deep. I’d do it a again in a heartbeat. It was just random.

We flew to Orlando and had a week with our great friends Gary and Santa and their boys Alex and Marlie. In total we probably spent about five weeks in the states much of the time annoying Gary and Santa. We are grateful for their wonderful hospitality and friendship.

We caught a midweek red eye flight with Virgin Atlantic to Gatwick, in the UK and then on to a train to Portsmouth, where Charsely picked us up and drove us to his wife’s hometown of Bishops Waltham. A very quaint place not far from Southampton.

Charlesy drove us all around the country side and helped us find a poo brown Renault Traffic with a Holdsworth camper conversion. It is not the VW Kombi that I had my heart set on, but after almost a week in the Renault, I have to confess that it has gone like a trooper, for filled all the requirements, has just enough space and I am starting to grow attached to it.

In the last week we have driven to the Cotwolds via Oxford and spent the night in a caravan park in Stratford upon Avon. Had a look around then went to the Warrick Castle, which was just amazing. Then onto a small caravan park to a place called Hasely Knob.

From there we drove to Kendal in the south of Lakes District, then onto Windermere for a brief drive through and eventually we found a fantastic car park to spend the night near a place called Hawkeshead – Beatrix Potter country. The following day we spent having a good look around a large part of the lakes heading up to Keswick and yep – Cockermouth.

We also spent another night in a car park on the mountain side, again it was fantastic. From there we drove through a remote and amazing part of the Northern Yorkshire Dales. We stopped in a Largish town called Richmond. From there we drove down to York and got desperately lost, even with the help of our trusty GPS  trying to find a somewhere to park the van for a night.

We are currently in a Caravan park just outside of York and Plan to head into to York for today and then move on later.