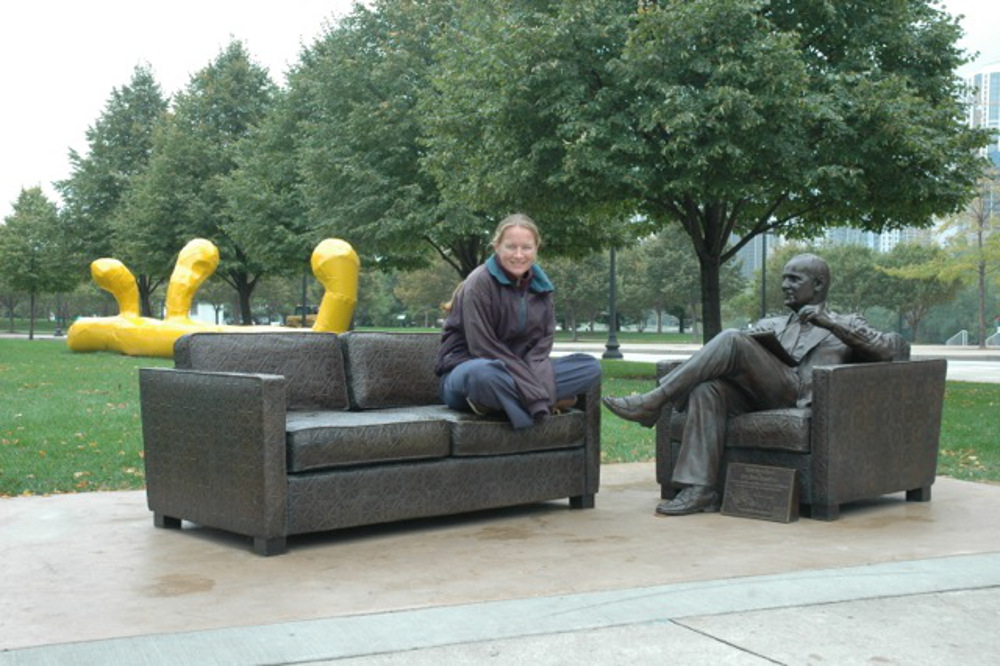 Well a lot can happen in a month!

In fact so much has been happening we have been putting of updating until we new the outcomes of some of the issues that were confronting us. Some of them are now resolved and some still up in the

We had a trip to Florida and spent 4 days in Orlando and then 2 days in Ft Lauderdale. We had a ball in Orlando staying with our friends doing some things that you would only get to do by knowing someone. We visited a couple of the natural springs in the area and having a river boat ride to see the local flora and fauna. We hit the shops big time and I purchased a banjo and Mel got a guitar.

;While we were in Lauderdale we stayed in the Riverside hotel which was right in the middle of the good bit, it was an old hotel that had been renovated in keeping with its original period. Melanie thought the best part was the flushing toilet, the bath and the king size bed.

thought the best part was the bar with the draft beer on tap. We caught up with Adam Lambert the first day we were there and had a look at the 135ft motor yacht he has just started on. It is undergoing a major refit and then taking a year to make passage to Australia via the Caribbean and the Pacific.

This white boat industry in Ft Lauderdale has to be seen to be believed, there is so much money going around you have to wonder where it comes from!After checking out Adam’s boat we basically got trashed. A couple of bars more beers than I can count and a massive hang over the next morning.&#xD;&#xD;Melanie and I had the next day to explore the Intra Coastal Waterway in the local water taxi, which was all day get on and off as many times as you like for $5.00.

Adam had suggested we travel up to Palm Beach to look at the boat he had been working on He suggested there may be a chance for Mel and I to get his old job. We met him at palm beach that evening and checked out the boat, a 100 footer and in beautiful condition, a real credit to the way Adam has looked after it. Our initial reaction was to be totaly overwhelmed by the size and the responsability.

As Adam was showing us over the boat we realized that if he was around to help we may just be able to do it. We left feeling it was a great opportunity but we had some issues to resolve, like our contract with Moorings, the trip back down to The Grenadines on Meltemia that we had friends and Melanies Mum and dad comming over for. Our general feeling was while it was a great opportunity and the money would be excellent we were really looking forward to going back down island. We told Adam we would think on it and get back to him the next day.

So back on the bug smasher to Marsh Harbour the next day should have been an easy process but the airline would not let us board to go back to the Bahamas as we did not have a ticket out and our work permits still had not come through. After much tooing and froing we had to purchase a full refundable fare back to the States before we could board.

For the next day Mel and I could not get this job opportunity off our mind we just kept comming back to it.  That afternoon the Moorings came back to us and said that because the other crew at Marsh Harbour had resigned we would probably not be going back to the Grenadines. We were pissed off to the max.

We had only confirmed with them 2 weeks ago that the boat would definately be going. Ric Hill, Fred Haes and Glen Feris were booked on flights to come and do the delivery as far as the BVI’s with us. Melanies Mum and Dad were going to meet us in St Marten to sail down to St Lucia with us. This was part of the reason we were at first hesitant to go for the job on the big boat as we were really looking forward to doing the passage with these guys.

On top of all that we had had enough of The Bahamas. We were really struggling entertaining ourselves while off charter. There is nothing to do and the place had gone dead quiet due to the hurricane season. The only thing that kept us going was the prospect of going down island at the end of October.

All of a sudden it was clear our trip down island with our friend was probably not going to happen so we should go full tilt at the job on the Mary Jane. Adam forwarded our resume’s to the owner and gave us his contact details. We waited a day and rang. The guy said he would pay our airfares and put us up in a down town hotel if we would fly to Chicago to meet him. He said worst case we will not get the job but have a free trip to Chicago.

We were on a flight to Chicago a week later. Chicago was great but cold. Peter picked us up at the airport, took us to lunch and then gave us a car tour of Chicago. He was a nice bloke and we got on well with him. He also has an I 70 that he races on lake Michigan in the summer and keeps in heated boat storage during the winter. He is retired and has his own Lear jet! He dropped us of at the Radisson right in the heart of Chicago said to enjoy ourselves and he would get back to us after in about a week.

So Back to Marsh Harbour.

Just before we went to Chicago we got some bad news. My dads health had deteriorated and he has to have His aortic valve replaced. This is the same op he had about 4 years ago so we new it was pretty serious and there was a chance I might need to travel home to see him before he went in to hospital.

Melanie and I got back into the work routine after 2 trips to the states in 14 days. We were preparing for a charter due to start on the 25th. That was when Hurricane Wilma started brewing. All the computer models predicted it would do a turn to the north east and head straight for the Abaco’s were we are. Within 24 hours it had the lowest barometric pressure for an Atlantic hurricane ever, 882 millibars.

At about this point we hear that dad is scheduled to have his op on Monday Oz time. From Marsh harbour it was going to be nearly impossible to get back in time to see him before hand so we decide to at least get to Florida for a couple of reasons. 1. get out of the path of the hurricane 2. be somewhere where we can contact home or get there in a hurry if we need to.

Even with tropical storm strength winds communication become really unreliable in the Cays. So its back on a bug smasher back to Florida where our friend Gary picked us up from the airport in Miami and took us to there home in Orlando, which is where we are now.

Wilma came through Florida with a vengeance and and absolutely hammered southern Florida. We were in Orlando and copped tropical storm conditions, not to bad and the sun was back out shortly after.

We are going to hang around in the States for a week or so and see if we can swing the job on the Mary Jane, and while we are here we may as well go on a bit of a road trip.

All for now more soon.

.S. Dads op went well he is home from hospital and doing fine